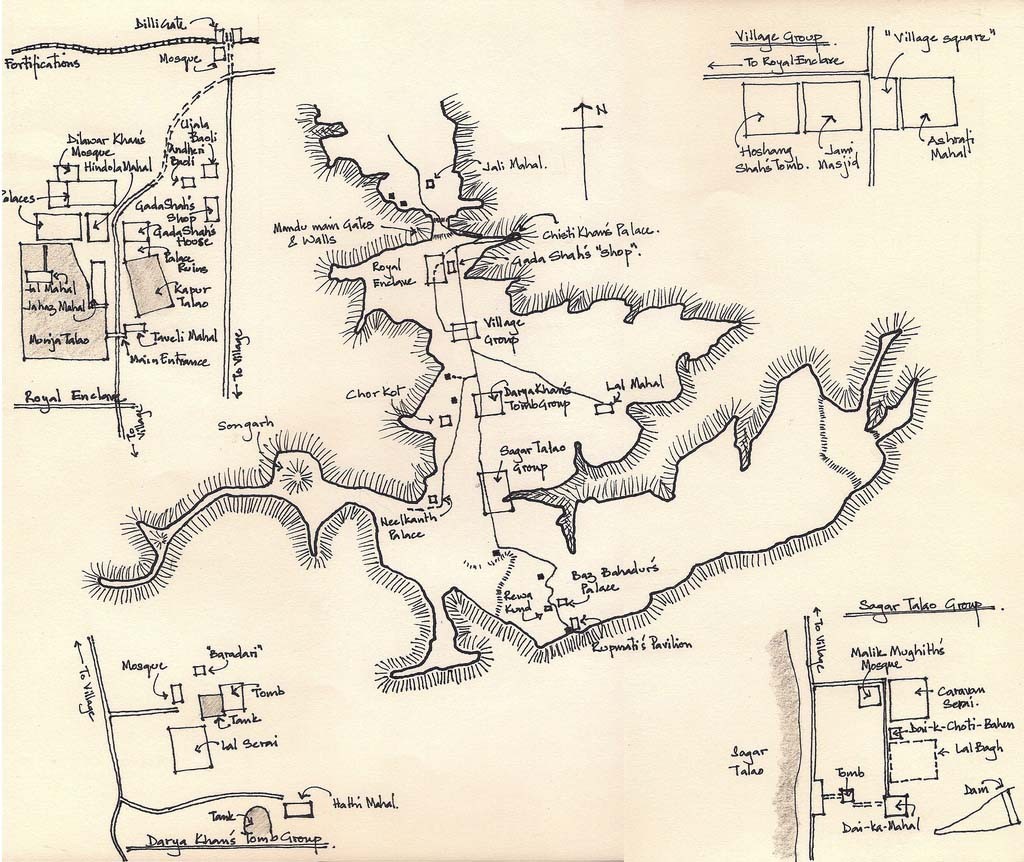 The 45 km parapets of walls that encircle Mandu are punctuated by 12 gateways. Most notable of these is Delhi Darwaza, the main entrance to the fortress city, for which the approach is through a series of gateways well-fortified with walled enclosures and strengthened by bastions such as the Alamgir and Bhangi Darwaza, through which the present road passes. Rampol Darwaza, Jehangir Gate and Tarapur Gate are some of the other main gateways.

This 120 mt long “ship palace” built between the two artificial lakes, Munj Talao and Kapur Talao is an elegant two storeyed palace. Probably it was built by Sultan Ghiyas-ud-din-Khilji for his large harem. With its open pavilions, balconies overhanging the water and open terrace, Jahaz Mahal is an imaginative recreation in stone of a royal

pleasure craft. Viewed on moonlit nights from the adjoining Taveli Mahal, the silhouette of the building, with the tiny domes and turrets of the pavilion gracefully perched on the terrace, presents an unforgettable spectacle.

An audience hall, also belonging to Ghiyas-ud-din’s reign, it derives its name of “swinging palace” from its sloping sidewalls. Superb and innovative techniques are also evident in its ornamental facade, delicate trellis work in sand-stone and beautifully moulded columns. To the West of Hindola Mahal there are several unidentified buildings which still bear traces of their past grandeur. Amidst these is an elaborately constructed well called Champa Baoli which is connected with underground vaulted rooms where arrangements for cold and hot water were made. Other places of interest in this enclave are Dilawar Khan’s Mosque, the Nahar Jharokha (tiger balcony), Taveli Mahal, the two large wells called the Ujali (bright) and Andheri (dark) Baolis and Gada Shah’s Shop and House, all worth a visit.

India’s first marble edifice, it is one of the most refined examples of Afghan architecture. Its unique features are the magnificently proportioned dome, marble lattice work of remarkable delicacy and porticoed courts and towers to mark the four corners of the rectangle. Shah Jehan sent four of his great architects to study the design of and draw inspiration from the Tomb. Among them was Ustad Hamid, who was also associated with the construction of Taj Mahal.

Inspired by the great mosque of Damascus, the Jami Masjid was conceived on a grand scale, with a high plinth and a huge domed porch projecting in the centre, the background dominated by similar imposing domes with the intervening space filled up by innumerable domes. One is struck by the huge proportions and the stern simplicity of its construction. The great court of the mosque is enclosed on all sides by huge colonnades with a rich and pleasing variety in the arrangement of arches, pillars, number of bays, and in the rows of domes above.

A reservoir, built by Baz Bahadur with an aqueduct to provide Roopmati’s palace with water. Today, the pool is revered as a sacred spot.

Built by Baz Bahadur in the early 16th century, the palace’s unique features are its spacious courtyards surrounded by halls and high terraces which afford a superb view of the surrounding countryside.

The pavilion was originally built as an army observation post. From its hilltop perch, this graceful structure with its two pavilions was a retreat of the lovely queen, from where she could see Baz Bahadur’s palace and the Narmada flowing through the Nimar plains far below.

This sacred Shiva shrine is sited in a magnificent setting, at the very edge of a steep gorge. In its tree- shaded courtyard, a sacred pond is fed by a stream, and pilgrims still gather to worship here.

Belonging to the Mughal era and close to the Nilkanth shrine, this palace was constructed by the Mughal governor, Shah Badgah Khan for Emperor Akbar’s Hindu wife. On the walls here are some inscriptions of the time of Akbar referring to the futility of earthly pomp and glory. Hathi Mahal, Darya Khan’s Tomb, Dai ka Mahal, Dai ki Chhotti Behan Ka Mahal, Malik Mughit’s Mosque and Jali Mahal are some of the other fascinating monuments. There is also the Echo Point, the ‘Delphic Oracle’ of Mandu. A shout from here reverberates far below and is heard clearly back. The Lohani Caves and Temple Ruins, not far from the royal enclave area also merit a visit due to their association with Mandu’s history and monuments. Sunset Point, in front of the caves affords a panoramic view of the surrounding countryside.