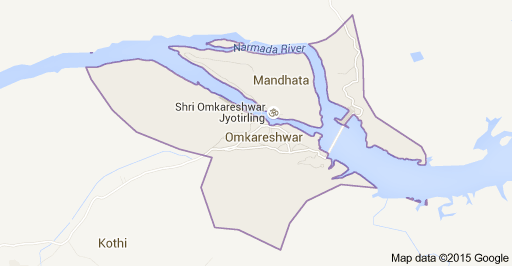 Omkareshwar is now a developed place as compare to old village type reputation. The place as whole has lot of change and developments are on. Like any other religious place Omkareshwar has markets on the approach roads to all known temples.

here. Two bridges are there to connect the Mandhata and Omkareshwar over Narmada. Many small hotels with low rates are there.

History of the Omkareshwar

In the medieval period Mandhata Omkareshwar was ruled by the aboriginal Bhil chieftains under the suzerainty of the Parmars of Dhar, the sultans of Malwa , the Scindia of Gwalior , who in turn handed over Mandhata to the British in 1824. The last Bhil chieftain Natthu Bhil fell out with Daryao Gosai a powerful priest of the place.

The latter approached the king of Jaipur to set right Natthu Bhil .

The king sent his brother Bharatsingh Chauhan , then Subedar of Jhalarapatan on the border of Malwa . Finally the entire tussle ended with the marriage of Bharatsingh and the only daughter of Natthu Bhil . Bharatsingh along with some of Rajput associates who also married other Bhil girls settled in Mandhata in 1165 A.D. Their progeny is called Bhilalas .