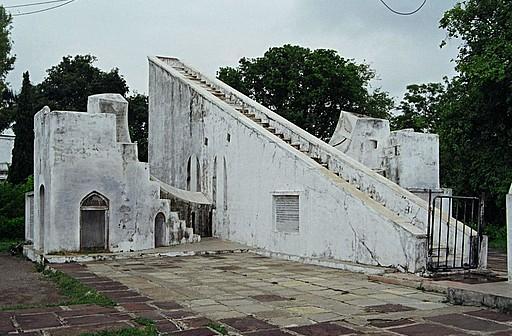 Ujjain enjoyed a position of considerable importance in the field of astronomy. Great works on astronomy such as the Surya Siddhanta and the Panch Siddhanta were written in Ujjain. According to Indian astronomers, the Tropic of Cancer is supposed to pass through Ujjain. It is also the fist meridian of longitude of the Hindu geographers. From about the 4th century BC, Ujjain enjoyed the reputation of being India’s Greenwich. The observatory extant today was built by Raja Jai Singh (1686-1743), who was a great scholar. He translated the works of Ptolemy and Euclid into Sanskrit from Arabic. Of the many observatories built by him at Jaipur, Delhi, Varanasi, Mathura, and Ujjain, the one at Ujjain is still in use actively. Astronomical studies are conducted through the Department of Education and the ephemeris is published every year. There is a small planetarium and a telescope to observe the moon, Mars, Jupiter and their satellites. The observatory is also used for weather forecasts.