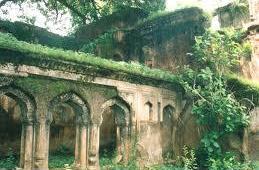 This place is known as the Tomb of Maulana Rumi. According to acertain tradition, Maulana Rumi was a Saint. The architecture of this tomb is hexagonal. This monument is five to six hunderd years old. Some speak of Rumi as a Turkish trader while others take him to be a commander of some army unit. Indian Antiquary, Volume IV of octomber 1875, has published a biography including precepts of the great Sufi Saint Jelal-al-din Rumi. This monument appears to have been constructed in his sacred memory.