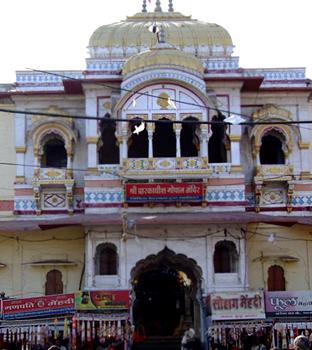 Gopal Temple is dedicated to lord Krishna, Gopal Temple in Ujjain presents a classic example of Maratha architecture. Built in the 19th century, by Bayajibai Shinde, this huge temple is placed in the middle of a big market. Its strategic position in the heart of the city attributes the popularity of the temple.

This temple is a marble-spired structure and the deity’s two feet tall statue is placed on a marble-inlaid altar with silver-plated doors. The door in the inner sanctum is the same door, which had been carried away by Ghazni from the Somnath temple. Mahadji Scindia recovered the door and now it has been installed in this temple.