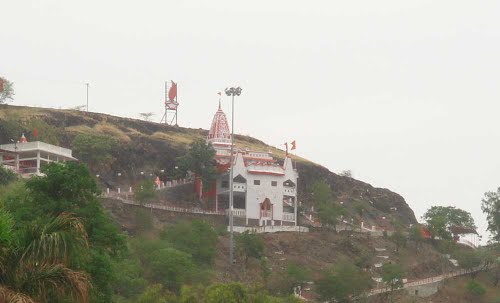 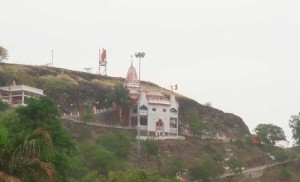 Tekri is a conical hill in Dewas.Dewas derives its name from this hill. It is situated at an altitude of 300 ft above sea level and is mounted by a broad flight of stone steps.Situated on Agra-Bombay Road,at a small hill locally known as Tekri. At the top

Dewas is an important region of Malwa. 7 kilometers south of Dewas is Nagda village. From historical proofs it has been known that about 5 centuries before Christ, Nagda was main city of Malwa as well as a main business center. When Ashoka was the Governer of Ujjaini, he used to visit this place. On the basis of archeological survey, remains have been found from 5th century BC till later years after Christ. Nagda village occupies a prominent position in Indian history.

Dewas city is recognized by the mountain here. It belongs to Vindhyachal mountain range. Here we found temples of Goddess Chamunda and Tulja Bhawani. Near Chamunda temple, there is the Bhairav Temple. It is a cave temple. According to ancient belief, it belongs to the time of Vikramaditya reign. Historical proofs shows that it is a religious temple constructed during Raja Bhoj’s reign, and reconstructed during Rajput and Maratha reign. On the tekri, there is the Shakti Peeth of the Nath Yogis. The priest of the peeth traditionally belongs to the Nath community. According to the Nath history, we find Bhrathari, brother of King Vikramaditya, who has relation with this region belonging to Naths. Yogi Gorakhnath was also related to this region. According to evidences of 250-300 years, it has been proved that this is a region of meditation of the Nath yogis. The Hanuman temple situated on the Chamunda mountain belongs to this ancient range. Near this is the Kalika temple in which is situated a water pool.

In 1899 famous Nath yogi Satguru Sheelnathji had come to Dewas. He had established his Dhuni in the Malhar and the Lal Bhawan on the tekri below the temple. This building is above the arena. Famous classical singer Ustad Rajjabali Khan Saheb was the disciple of Sheelnathji.

According to various proofs, it has been known that many kings had sent offerings to this temple, some of them being renowned ones. From time to time offerings had been sent by Prithviraj Chauhan, Rana of Udaipur, Peshawas and the Pawars to this temple.

Many medicinal plants were found on the tekri that were beneficial in curing many diseases. Several waterfalls were flowed out from here. Till 1954 the minerals and elements found in the water were beneficial for health by either bathing in it or by consuming it. With regards to history, archeology, mythology and environment, Chamunda tekri is a very important region.

About 2000 years ago the tekri and the surrounding areas were covered, for miles, by the dense forest. Being an isolated \ place filled with environmental completeness, many ascetics visited this place for the meditation amongst whom, Bhrithari and Yogi Sheelnath were main. From time to time for the comfort of the pilgrims, construction work has been done

On the tekri of Dewas, there is a temple situated of chhoti (younger) mata. The Goddess is revered as the Kuldevi of the kings of Dewas. Even now the Marathi devotees from Akola and Amravati visit the temple so that their forthcoming year be fortunate.

Dr. Surendra has written that the statue of the Godess has been carves out of the rock. This statue has been traced the archeological department to the Parmar reign. The eyes have been placed afterwards. He has further written that the priest of the temple has informed him that he has a tamrapatra (copper plate) in which the date of carving of statue is written as 12 century A.D., however the tamrapatra had not been shown to him. A possibility has been stated that there was a huge temple during the reign of the Parmars which was destroyed with the passage of time. Past king of Dewas had a dream and after that the renovation of the temple was done.

In this temple varied forms of Goddess have been beautifully carved but at time the architectural norms are not considered and the sculptures have carved out of their own imaginations. Among these images is the image carved out on the rock is God of Dewas. It is a unique image in itself. From the traits it is true that it is not the statue of Chamunda Mata. From the image it seems it is the image of Mahish Mardini but no indication of Mahish demon is shown. This 3.60 meter statue is believe to be if Rashtrkuta age i.e. of 8-9 A.D. The Goddess is depicted with four hands carrying Trishul , Khadag, Dhal and human head in the first, second, third and fourth hand respectively. On the left side of the image is carves the swan. It is decorated with the necklace around the neck, earrings in the ear, crown on the head, bracelet in the hand and anklets in the legs. This image of the Goddess is special in itself. The image cannot be identified on the basis of the Puranas and Agam scriptures. This image is from the imagination of the sculptor. The stones of the mountain are of Deccan Drape type. Incomplete attempt have been made to cut rock of the right side of the image to construct a cave which is famous as the Bairav cave.