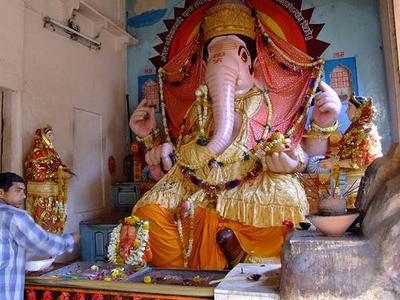 Bade Ganesh Ka Mandir is situated near the tank of the Mahakaleshwar Temple. It holds a colossal statue of the elephant-headed God. The elephant head of the deity signifies wisdom, discretion and foresight that the Hindus attribute to divinity.

In the center of the Ganeshji temple, there lies an exceptional statue of Hanuman, a deity of devotion and belief. What makes this deity so unique is the fact that Hanuman is depicted here with five faces, which symbolises courage, loyalty, devotion, strength, and righteousness. An important centre for learning, Bade Ganeshji Temple imparts knowledge in the field of astrology and Sanskrit.